Denali Sells $700K Colt by Into Mischief at Fasig-Tipton Select 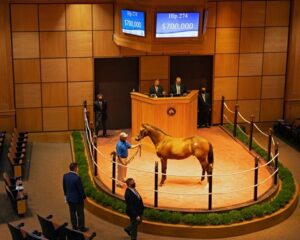 Yearlings by prominent sires Into Mischief  and Curlin  each fetched final bids of $700,000, the second-highest price during the Sept. 9 first session of the Fasig-Tipton Selected Yearlings Showcase.

Agent Demi O’Byrne acquired the Into Mischief colt consigned by Denali Stud, agent, as Hip 274. The colt, bred in Kentucky by Jeff Lewis’ Lewis Thoroughbred Breeding, is out of the Unbridled’s Song mare Night and Day, the dam of grade 2 winner Made You Look.

The colt is from the successful female family of Bob and Beverly Lewis’ champion mare Serena’s Song, a $3.2 million earner who was as prolific in the breeding shed as she was on the track. Among the 10 winners produced from the Rahy mare were Sophisticat, a group 1 winner in England and group 3 winner in France, Oaklawn Handicap (G2) winner and sire Grand Reward, grade 2 winner and sire Harlington, and grade 3 winner Schramsberg. It is also the immediate female family of champion Honor Code .

“That’s a special horse for us,” Denali’s Conrad Bandoroff said. “He was bred and raised on the farm for Jeff Lewis. That’s obviously a family that has meant a lot to us. He’s a horse that from the moment he hit the ground we always liked him and thought pretty highly of him. It’s nice when you bring a horse you believe in and have a lot of confidence in, and a judge like Demi O’Byrne, one of the top judges in the world of horseflesh, agrees with you.”

Excerpt from Bloodhorse By Ron Mitchell