The NYRA circuit offers some of the most lucrative purse structures in the US, and for the savvy buyer, a smart purchase at a NY-bred sale will reap its own reward. Denali will be consigning twenty-three yearlings from families with success at the track both in and out of the state. Some highlights include:

A beautiful bay filly from Collected’s first crop, she’ll be the first for Denali through the ring and will be bringing a page filled with New York stakes success. She’s out of the stakes-placed Henrythenavigator mare, Wild About Harry, who herself is out of another stakes-placed mare on the New York circuit, Ouchy Night. It’s the same story down the page with generations of her family finding success on the biggest stages in the Big Apple. This is the family of black-type producer and ten-time winner, Mine Tonight. 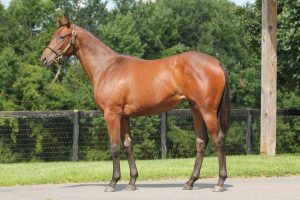 A beautiful daughter of Alternation, sire of Kentucky Oaks heroine Serengeti Empress, she’s the first foal of a young, unraced daughter of the late Bernardini. The stallion has already made his mark as a broodmare sire, and he provides an added influence on a family already stacked with graded stakes success. The second dam, Adorahy, produced nine winners including Icabad Crane, who won or placed in sixteen stakes races, and Our Golden Dream, a stakes-winning mare who went on to produce Group-stakes winner, Need I Say More (No Nay Never). There have been three updates to the page since the catalog was printed; this is a very active family who loves getting their picture taken. 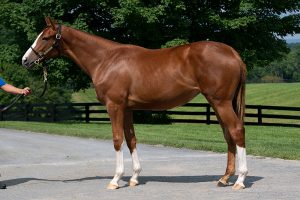 A late March filly by first-crop sire Good Samaritan, this beautiful yearling has a racey look to her. She’s out of a black-type placed, young mare named Animal Appeal, who won four times later in her career. She is her dam’s second foal; her half-brother recently posted a work going 3f in 38. There are horses with more than ten wins up and down this page including several with black-type. This is a racehorse family. 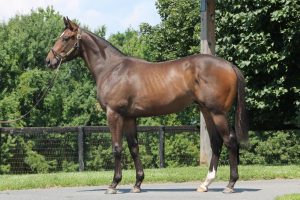 A striking son of Hard Spun, his sire had three 3YO Gr. I winners on the dirt in 2019 and was the only stallion with five horses to run a 100+ Beyer on dirt in 2020. HIP 405 brings a pedigree loaded with graded-stakes success. His dam has four winners from eight to race including a six-figure earner in Japan named Medaglia Flame. Another half-brother has five wins to his credit with over $200,000 in earnings. Going further down the page, there is the GIP colt, Straight Story, underneath the second dam as well as millionaire Strong Souther in Japan, and Mobile, an earner of over $770,000 also in Japan. This is the family of Broodmare of the Year, Take Charge Lady, and of Charming, who produced Take Charge Brandi and Omaha Beach.

An early January filly by the late, great Pioneerof the Nile and out of the hard-knocking Gr. III winner, Flipcup. This is her dam’s first foal. Pioneerof the Nile is best known for his Triple Crown-winning son, American Pharoah but he had talented fillies like GIP filly, Catch My Drift; Gr. III Delaware Oaks winner, Dark Nile; GIP racemare, Mother Mother; to name a few. Flipcup enjoyed success both in the States and in Canada at the graded-stakes level. She captured the Gr. III Maple Leaf at Woodbine and the Gr. III Arlington Matron. There is a new update under the second dam since the catalog was printed. 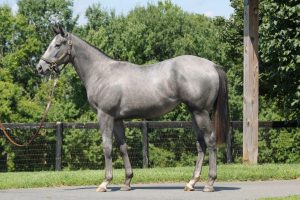 A grey filly by Freud and out of the Birdstone mare, Hoopskirt. The dam has one winner from three to race, and the second dam, Deep South (Unbridled’s Song), has produced graded stakes winner, Remembering Rita. There is also five-time winner, Drake Passage. At the bottom of the page, there are horses like Stormy Liberal; Gr. I Breeders’ Cup Turf Sprint placed, Leinster; Gr. III stakes placed, Shimmering Moment. Freud has been the #1 sire of NY-breds for seven consecutive years, and can get a graded stakes winner on any surface at any distance. 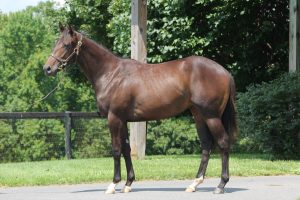 A mid-February filly by Violence and out of the unraced Ghostzapper mare, Lipstick. She is her dam’s second foal. This is the family of House of Fortune, a GISP runner of just shy of a million in earnings; she has produced seven foals to race and five winners, including Thirteen Squared (Liaison), who was third in the Gr. I Santa Anita Oaks. Graded black-type is all over this pedigree and HIP 465 is a classy addition to their rankings. 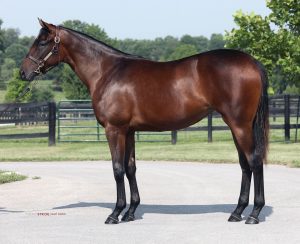 With Tapit’s continued dominance of America’s best racing, hopes are alive that his sons will do in kind, and Constitution already has a jump on the crowd. If you’ve been dreaming big lately, this filly is for you! By the aforementioned Constitution and out Not A Peep (Successful Appeal), this family is worth a second, and a third, and a forth look. The second dam, Silence Please (Quiet American) has nine winners to her credit; horses like GIISP Brigand, and stakes winner, Sky Music. She’s also the dam of Blue Beryl, whose son Founder recently pulled away from the field to win the Tale of the Cat stakes at Monmouth Park. The third dam faired just as well with no less than ten black-type earners (several graded) coming from her or her daughters and granddaughters. 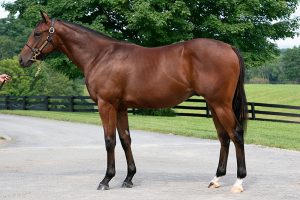 Our love affair with Bolt d’Oro continues and this strong colt is another one to add to your short list. By Bolt d’Oro and out of a stakes-placed mare named Silly Sister, this is not a family to laugh at; his dam is a half-sister to the multi-millionaire Moanin, a Group I winner in Japan. This yearling is her first foal. The third dam, Chaste (Cozzene), has two producing daughters, one of whom is the dam of Gr. II Golden Rod winner, Road to Victory. This is the family of Rose Brier, a course record-setting, fourteen-time winner.

We will be in barn 7A for the sale!