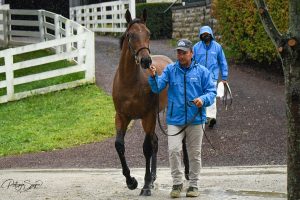 A Denali Stud consignment heads back after selling in the ring at 2021 Keeneland September.

A voraciously competitive market drove prices higher than in years prior as buyers who were shut out from the earlier books rushed to buy a horse later on in the sale. To that end, Denali Stud experienced a record consignment for the 2021 Keeneland September Yearling sale. From the 99 offered, 85 sold in the ring or privately afterwards, and we experienced record low RNA rates in Book 2. In Books 3 to 5, Denali Stud boasted a record gross for each of the books. Some of the highlights include:

The Denali Stud team worked hard to make Keeneland September 2021 the success that it ended up being, and we couldn’t be proud of all their hard work.

As always, it was an honor to represent some of the best breeders in the country at the world’s yearling market on the world’s stage. We wish the new connections all the best with their purchases and we look forward to the next auction where we’ll be offering your next Saturday Afternoon Horse.